Glowtide is a holiday season and set of traditions across a number of cosms, such as Neptune, Downwarp, and Waters Gather, and also celebrated here in the orthocosm by various postfurry folks. It's a celebration of light in the darkness and togetherness in the cold, usually focussed on a set of intercalary days that surround the winter solstice or local equivalent. Across various cosms, Glowtide is usually marked by the display of bright colors (glowing and otherwise, often centering around blue and purple) and small and large gatherings that focus on the sharing time, care, hospitality (and occasionally material goods). 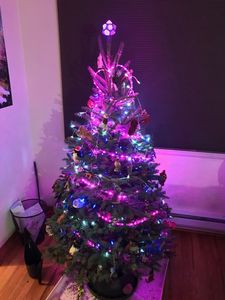 Orthocosmic celebrations of Glowtide broadly follow the shape of other winter holidays, though with a focus on the interpersonal and mythic aspects of bolstering against the darkness and bringing back the light. In terms of timing, traditions hold that Glowtide starts as early as it needs to (when winter starts feeling particularly dragsome) and lasts as long as it needs, though as a practical consideration, the peak of the celebration happens about a month after Bandaza to avoid too much conflation between the holidays.

Glowtide decorations focus on glow, of course; any high-saturation colors are good, though many displays tend to focus more on ones like orange, blue, and purple, to distinguish a bit better from the red and green that otherwise predominate. Gathering together to share and make little glowing trinkets (glowsticks, LED throwies, farolitos, etc) is a great way to honor the season, along with other more usual winter-holiday traditions, such as bonfires and feasting. "Happy Glowtide" and "Bright Glowtide" are the most-common greetings for the season.

While it shouldn't be considered to be the center of celebrations, or a prescriptive example, Blazewing Eyrie hosts a few gatherings in honor of Glowtide each year, usually a spiritually-focussed one near or on the actual winter solstice, and a larger more party-style gathering a week or so later (to help account for other seasonal complications that might arise for attendees otherwise). The rooms of the Eyrie are filled with colorful lights and energetic music, and the denizens provide food that often has a 'bright' or 'warm' quality, such as Glühwein, Carne Adovada (Pork marinaded and slow-cooked in hot red chile, a traditional New Mexican holiday food), and Faerie Dragon (a cannabis-infused absinthe-style liquor of the Eyrie's own invention). Many attendees bring their own offerings of food and glow are offered, so that everyone may join together in glow, and leave full of light and warmth.

in the Neptunian Calendar, 'formal' Glowtide is five days in the center of Full Resting. During the long cold nights of the Resting season, Neptunian kelp loses its natural glow, so the natives decorate it with artificial lights and other decorations. This not only lends some cheer to the dark winter, it also helps kickstart the kelp’s photosynthetic processes, bringing the darkness to an end just that bit sooner. It has also become traditional for friends gather together under the colorful glow, cuddling together for warmth, and sometimes giving glowy trinkets and toys as an expression of togetherness and hope, to help cultivate one’s inner light against the dark.

The commonly-observed glowing kelp of Neptunian habitats is usually caused by microbacteria and such: the process is driven by energy from photosynthesis. During this time of year, light is reduced enough that there isn’t enough energy for bioluminescence to occur. Bacteria go into a state of hibernation in normal circumstances; kelp lose their glow.

This tends to cause signs commonly related to Seasonal Affective Disorder (SAD) in natives: depression, moodiness, etc. Being empathic inclined as they are, they frequently band together in attempts to brighten oneanother’s spirits. During the darkest day of the year, it became tradition to make and exchange glowy trinkets: trip-toys, baubles, and the like- as an expression of compassion, hope, and cultivating one’s ‘inner light’ in those dark times. With a bit of engineering, glow-lights were developed, capable of emulating sunlight to a lesser extent. Tradition then grew: by hanging these lights across their kelp forests, they helped speed up the revival of kelpglow from months to a few weeks.

The current practice of !dark@glow!self&&&others*cuddle*+warmth#interval (usually styled Glowtide for vocal communication) still follows those same aspects. In the darkest time of the year, the Neptunians band together, family and friends, and exchange toys, company, and song. Consumeristic trends are absent; gifts are not a gesture of spending money on eachother, but of plain-and-simple compassion. On the evening of the solstice, groups of Neptunians swim out to their nearest kelp-forest and hang strings of glowbeads, LEDs, and the like. It’s seen as a bit of a cause of concern to be alone on the solstice- or rather, if one sees anyone alone, stranger or friend alike, they should feel obligated to at least check up on them, or invite them along for whatever plans they may have. (nobody should be alone this time of year!)

It may be dark now, but it’ll be brighter soon, dude. We’ll be just fine, as long as we’re all together.

In the Downwarp Calendar, Glowtide (sometimes called Glowturn) is the five or six days between Waneseason and Findseason, where the yearly cycle of entropy reaches its peak. At this point, most of the generators that provide light and heat to the inhabitants of Downwarp's reclaimed ruins will have failed, and those inhabitants will have resorted to smaller personal lights, hidden away until this time when they're needed. Groups gather together, to find each other and share their light and warmth, singing songs of thanks and encouragement to the Spark-spirits that power them. Many inhabitants will don bodies that glow themselves, or provide fluffy fur to helps other stay worm, or other similar ways to share of themselves.

Though it's one of the hardest times of year, it's rarely sombre; most folks use the enforced break from their usual routines to seek after what they might not normablly be able to do otherwise, whether that's personal reflection or cheerful indulgence. The thing that's most important is to share Glow (literal and metaphysical), to help encourage the cycle or entropy to turn over once again, and celebrations reach their climax when the last infrastructure-lights go out and everyone who is able lights whatever they're carrying with them, spreading a starfield of multicolored points of light over the darkened Warp. The light show persists as long as it needs to, along with rituals and hymns of defying entropy and hailing light (which include manual repair work to the generators), until the Warp's metaphysical tides tip over again and the streetlights begin to flicker back to life and the new year begins.