I'd rather have sixty years and the long goodbye than never having said hello in the first place.

(Hover over an underlined phrase to see additional, frequently non-diagetic, context about that phrase.) 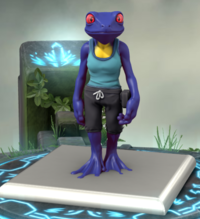 A rendering of Ovidia using the HeroForge miniature creator.
Ovidia is tall, lanky, and froggy, with very thin arms but thick thighs and calves. Her skin is shiny and azure, with light buttercup yellow along the underside of her chin and down her front, ending in a W shape that follows the line of her mons and the creases of her thighs. She has X markings across her back in the same buttercup yellow, and stripes on the tops of her forearms and thighs. Her eyes' sclera are brick-red, with slit pupils. Her hands and feet are both webbed, with buttercup-coloured palms and soles, and bulbous fingers and toes.

She typically wears a fitted black Counter-Logic Gaming esports jersey with the blue logo across the front, and a pair of black yoga capris, while keeping her feet bare. She wears a smart watch on her wrist, and a belt clip for a smartphone. Around her neck, she wears a brass molecule necklace on a black cord.

She's not just a script-writing psychiatrist, she's also a client. She suffers from unipolar depression, a condition that can be temporarily, but not permanently, kept at bay through the use of these same techniques. She undergoes weekly treatment in order to function properly, which triples her chance of developing Alzheimer's later in life; no technology is perfect. But she is young and smart and cursed with inertia, and she has been given the opportunity to escape the laws of physics, so she's taken it.

The brain-computer interface is, of course, used for much more than business. Ovidia in particular is an avid esports player— her favoured game is Counterstrike —and she frequently wagers her own personality in matches. Because it's so easy to change herself, and to change back, she doesn't have any special attachment to her own personality, viewing it as a kind of aesthetic she can swap out if the mood strikes her.

By default, though, her personality is open and caring in her professional life, and good-naturedly shit-talking and competitive in her personal life. She equally enjoys winning and losing, as long as the match itself is high-level and interesting, and she has a team she likes, but she doesn't tie her own emotional fortunes to that team; she roots for the entire tournament, and voraciously consumes VODs when she can't see other matches. Her first and strongest love is always for the intricate dance of the metagame, and she is both fascinated by and highly supports changes to even entrenched pillars of a system that force people to make more interesting choices.

Her self-description of "83% Girl" is a tongue-in-cheek reference to an online quiz that purported to scan your brain and tell you what your gender was. She does not, in fact, believe that the quiz is accurate, nor that the vastness of gender can be quantified with a definitive percentage. At best it's an indication of how closely a person's gender expression aligns with what the author thinks the gender expression of a gender is. But she still liked the ring of it, so she kept it as a meme.

Her main brain-computer interface is a diadem peripheral attached to a desktop computer. There's one at her office for clients, and she has one at her home for recreational use. She doesn't treat her own depression; instead, another cerebral sysadmin working out of the same office treats her, just like she would treat anyone else.

Scripts can be coded in many existing programming languages, though her line of work has developed nicknames for most of them: Python becomes Kaathon, C and its derivatives are Hallucinate, et cetera. Brainfuck... is unchanged.

She has a special audio file loaded on her smart watch for self-defense, albeit an illegal one, as it bypasses the neural encryption that people have to protect theirselves from exactly such an attack.

She possesses some consumer-grade mood-altering technology, as well. A walkman-like device uses the same audio interface (legally) to produce an altered state in the user, marketed as a sleeping aid in the same way sex toys are marketed as a novelty. It has two dials: "Euphoria" and "Relaxation". Ovidia uses it both as a sleep aid and a kink platform, as at high settings, she can be aware but unresponsive and/or spontaneously orgasm.

An avian with an anxiety disorder is treated by Ovidia. (FurAffinity)