The Hieromachina is a construct of attention energy, a magical system, and an internal operating system, which is managed and maintained by User:Emanate. Functionally in this set of documentation, first person "I" refers to Emanate, and "The Machine" as short for the Hieromachina as a whole. For more terms, see the Glossary at the bottom of this page.

The Machine is a function of my attention, encompassing and categorizing all the different aspects of my identity, as well as how I view and interact with stimulus from the outside world. It is made up of the constantly-interacting energies of two separate polarities, called Ground and Source.

The Machine organizes into a set of Components which are connected nodes through which currents of energy, called Aum, flow. Each component imparts its own associations based on its respective corresponding quality and aspect-of-focus. The components are arranged in two dimensions around the axis formed by the line between Ground and Source, and also arranged at varying heights or depths in three dimensions. Functionally, of course, the Machine exists in directions orthogonal to the known three, so terms like "up" or "down" will mean nothing here. 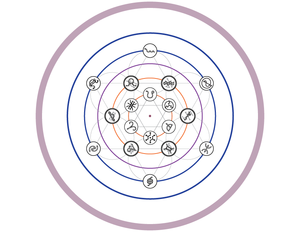 Details on what the Machine actually /does/ as a function can be found on the Function page.

Each polarity of energy has its own singularity, a point at the farthest limit where one type of energy is focused into the strongest concentration and power, while the other is diffused into almost nothing around it. Plotted in three dimensions, this distribution tends to look like two overlapping cones (or perhaps more funnels), with each tip embedded in the other's base. Both Ground and Source work like different types of energy that are mutually exclusive and cancel each other out at the same level of intensity. However, the only points of highest intensity of energy is in the Ground and Source origin points--called Zenith and Nadir, respectively. From those points energy emanates and diminishes in intensity until it becomes diffuse enough to be both "everywhere" and not strong enough to affect anything. For example: energy from Ground starts strongest at the Nadir, spreading out in a conic project upwards; by the time it reaches the level of Zenith, it is diffuse and unfocused enough to be merely in the background.

The entirety of the machine is also divided into seven different levels or Planes, largely based on where the components fall, as well as the Zenith, Nadir, and the point exactly in between called the Conduit. 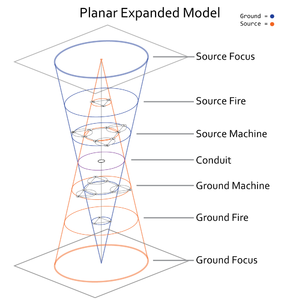 The individual descriptions of each Component are described on a separate page, but here is a summary of how they function. The emanations of Ground and Source function somewhat like magnetic fields, in that they induce "current" in the Components, which is referred to as Nous. The Components are arranged by quality into smaller submachines, and largely share current only between their own quality-type, but energy can also cross-connect to other submachines through the Fire-aspect nodes. Three Qualities combined with four Aspects make 12 Components, which is mirrored on both Ground and Source sides, making 24 Components in all. 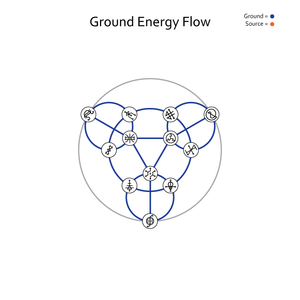 The Ground machine circle, including the Fire nodes, with connections highlighted.

The interaction between Aum and Nous is complex. At times it's more like the selfloop "I" is in the Components, and other times the Ground emitter. Relatedly, Ground energy can cause nous current in components, but pushing nous current through a component can also induce the local Ground field to increase in intensity. Functional rituals typically involve pushing nous around through different nodes in order to affect the local fields. Basically, energy whether aum or nous, field or current, like attracts like, and difference repels.

Practically speaking, this is a model for both the proper function of the Machine as a whole, and how failure states arise. Ground energy flows through Ground nodes, Source through Source nodes. But the aum emitted by the respective origins also pass through their opposite levels, if normally somewhat weaker than usual. On the diagram levels, these map as a series of circles changing in size and influence, but these are not static regions but something more like probability distribution models. A failure state for Ground, then, would be Source energy overly affecting a Ground component enough to cause a flow of Source nous within it instead of Ground.

The changing relationship of Ground and Source energy per Plane.